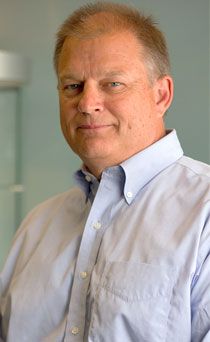 John Eckstrom, president of Carolina Business Equipment Inc., Columbia, South Carolina, was named the Business Technology Association's (BTA's) 2016 Volunteer of the Year on June 10 during the BTA at 90: A Celebration event at Kansas City Union Station in Kansas City, Missouri. Eckstrom serves as the BTA Southeast representative on the BTA Board of Directors. 2015-16 BTA President Dave Quint presented Eckstrom with the award.

"This year, the recipient of BTA's 2016 Volunteer of the Year award is a gentleman who stepped forward several years ago as a volunteer," Quint said in his remarks during the awards ceremony. "He has since served as an outstanding and loyal member of the National BTA Board of Directors for the past year. Previously, as a volunteer, he played a very key role in the growing success of the BTA Southeast district events."

Each year, BTA's national president has the opportunity to recognize one individual who has distinguished himself (or herself) for exemplary service to the association. The Volunteer of the Year award dates back to 1962, when then-NOMDA President Edgar Knoll presented the first of these awards (at that time, it was called the Dealer of the Year award) to George Chadwick. 2016 marked the 51st year the award has been given to an outstanding BTA volunteer.

"I was absolutely blown away when I heard my name called for the BTA Volunteer of the Year award," Eckstrom said. "My first thought was that it was one of [event emcee] Bob Goldberg's jokes, but when he smiled and said, 'Come on up,' it hit me that, this time, he wasn't joking. Working as a volunteer has been very rewarding and allows me to give back to the association. To be recognized with this award is certainly an honor and I thank BTA for it."