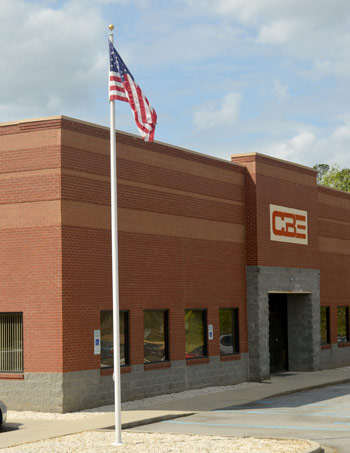 Starting out as a traditional copier dealer in 1975, Carolina Business Equipment (CBE) now provides a wider range of devices, as well as software and various managed IT services. As a 3T training facility, the company does in-house training for all the manufacturers they represent.

“I am very blessed, but as the owner and president of a company, there is a drive to grow and do more—and I hope that ‘drive’ never pushes out the more important things like my faith in God and my family,” said John Eckstrom. When he bought 50 percent of Carolina Business Equipment (then called Columbia Business Equipment) in 1995, annual revenue was sub $2M. Five years later, with sales having increased to $3.5M, the opportunity to purchase the other half presented itself in 2000, and he did just that.

From the moment he walked through the door, originally as the controller, Eckstrom knew that CBE was in need of a top-line management overhaul. He also wanted to expand geographically, though he understood patience was required. And he was seeking employees who would follow this mantra: Be straightforward in what you do and do what you do exceptionally well.

Fast forward to the present, CBE took in $6.5M last year (up from $4.5M in 2009) and has brick-and-mortar operations in Columbia and Charleston, the two biggest cities in The Palmetto State, with a third branch in Florence. “Our management team pulls together and pushes with a passion,” Eckstrom said. “Mistakes happen and I can live with them, as long as we learn from them and correct them so they don’t happen again. Ultimately, if we put a man on the moon and brought him back to Earth, how difficult should it be to get stuff done right the first time?”

The company is in the wide format space but not production or 3D print. Office hardware is very much CBE’s wheelhouse—and the company has limited its strategic alliances with manufacturers to three. “Every one of our reps can sell all the brands we handle,” he said. “It’s a pretty simple thing: You don’t need specialists to sell a copier.”

This philosophy has other advantages, including becoming an expert in service. CBE is, in fact, a factory-authorized technician training house, offering CBT options and hands-on training—anywhere from two to five days—at its Columbia headquarters. Maintenance comprised 44 percent of the company’s 2015 revenue (hardware was over 40 percent; MPS has a share in both).

“If you ask 10 people for their definition of managed print services, you’ll likely get at least eight different responses,” Eckstrom said, adding that MPS stems from a glorified CPP program. “In 2010, it was near impossible for a dealer to walk into a business and take over the print management because the business was still hamstrung by the inefficiency that had brought it there in the first place. So we floundered for years, and I felt like what was talked about and what could be done were very far apart.”

Managed Print Services (MPS) is now a vital component of the company’s strategy. It’s another card to play during the assessment stage of the sales cycle. CBE can centralize or decentralize a fleet, and by standardizing on just a few brands, the learning curve for users is not only reduced, but it eliminates having to keep a mass variety of consumables in inventory, too. “Clicks are coming mainly on the single-function side—we’re tracking around 15 million pages per month,” he said. “In 2013, we were in desperate need of low-end desktops that could be clicked affordably, and it wasn’t until we discovered OKI that we were able to truly compete in the MPS marketplace.”

As Eckstrom explained, OKI’s devices at the time—and ever since—aligned with what CBE was trying to accomplish from an ROI/TCO perspective. Now, with the manufacturer strengthening itself in the channel, OKI realized it needed a more formalized group to help drive strategy and provide recommendations for the development and expansion of products, solutions and programs. Hence, the newly formed OKI Data BTA Dealer Council, of which Eckstrom is the chair, began its three-year term in December 2015. Through regular calls and in-person round-table discussions, the 12 members (each with 10–15 years of industry experience on average) aim for more active two-way communication with the management team, including Masahiko Morioka, President and CEO of OKI Data Americas.

“With OKI’s increased commitment to the BTA channel, we’re acting as advisers and facilitating change,” Eckstrom said. “It is gratifying to be part of some of the strategic planning as OKI bolsters its foothold with dealers. It’s going to take continuity and plenty of game planning to achieve the vision, but OKI is well positioned to do some real spring boarding, and it will be great to see OKI succeed in the channel.”

Eckstrom and his wife of 32 years have two sons in their 20s (both work at CBE) and a teenage daughter who is a very accomplished tennis player—it’s easy to tell how proud he is of her. When asked about his hobbies, he said that he plays golf when he has to and he hunts and fishes when he gets to. He has served on many local boards, including chairing the Better Business Bureau for the State of South Carolina. He currently is on the missions committee for his church and will be leading a team to Spain this summer.

Professionally, Eckstrom spends much of his time these days with software and managed IT (MIT). To him, the behavior change for sales reps isn’t about leading with software—it’s about finding out what the customer needs. “Oftentimes that road still leads toward software and managed IT, and it’s pretty easy to figure out both the pain points in the market and what the overall solution is.”

CBE currently has seven staff members dedicated to MIT. “Like most folks trying to build a managed IT company versus buying one or partnering with one, we began providing break/fix services but later migrated to block-of-time contracts. We have now moved all of our clients over to the managed platform.

“Most of our customers are SMBs, and the managed IT opportunities are coming from these businesses that don’t have a dedicated IT department,” he continued. “They’re looking for remote support, 24/7/365 system monitoring, cloud-based services and otherwise. It’s becoming a bigger piece of our puzzle. With managed IT, you have to know how, and when, to say no. After experimenting with different approaches, we’re now dialed in with managed network services (MNS). We’re a proven managed IT provider in our area, to the point where we have other MNS organizations asking us to help with things like Cisco programming and infrastructure support. We are proud to have such a good reputation from our peers!”